We have vague, drunken memories, but did we really go into Columbus and take down a top ten Buckeye team?

All the fun, after the jump.

Basically on repeat since Saturday night.

Amazing is the only word we can come up with to describe that game.

There’s just so much to talk about!

First of all, the game itself.

We may be overstating, but this is one of the most important victories in Virginia Tech history. Right up there with the two Orange Bowl wins (Cincy doesn’t count, c’mon) and basically every conference game during the ’99 season.

This program is at a crossroads. For years, we were perennially in the top 15. Many times a preseason darkhorse for a national title (HA!).

But one absolute shit season and one that ended with a curb stomping by UCLA saw us disappear from the national landscape. Should two bad seasons spell doom for your program? Absolutely not. But success in college football is fleeting. Especially if you don’t have the money of an Ohio State or a USC to ensure we recover at some point.

Hell, look at Tennessee. National championship in 1998. 6 of their last 9 seasons have seen more losses than wins.

But beating 8th ranked Ohio State in their house on a national stage? That puts us right back in the conversation.

Sure, there’s the chance we lose some games this year and are eventually an afterthought for the 2014 college football season.

But if we didn’t win that game Saturday night, we’d have been an afterthought immediately.

But we did win.

For as many early season games against big opponents that we’ve seen our boys lose, the feeling is incredible.

And this was just a euphoric.

For a brief moment, as Riley was returning the last minute pick-six, every Hokie around the world was united as one.

Because we just f*cking won.

Warning: the above may not make sense as it was written by a drunken Steeler fan on Thursday night.

That was not a top ten team that we beat. That was a team with a mediocre QB ranked based on their Heisman candidate QB.

But man, Bud’s defense made them look absolutely silly.

Ohio State had two possessions to tie the game near the end of the game. During those possessions, the D had four sacks, two interceptions, and a touchdown.

And how about Michael Effing Brewer (MEB?)!!

Last week we were hopeful that we had really found ourselves a legit QB. This week, we’re sure of it.

Kid is a freaking BEAST.

Also, we’re pretty sure he has about 6 concussions from that game.

Also, Ohio State is ranked one ahead of us in the coach’s poll. Is there any better indication that the coach’s poll is absolute dog shit? It was once used to determine the national championship! Seriously!

It’s ECU. They’re pirates or something.

They also might be the best team in North Carolina.

We don’t really know, but it sounds good doesn’t it?

Coming off a huge win. Playing a decent but clearly an underdog team that makes this game their superbowl.

But we say f*ck that.

The crowd is going to be absolutely ON FIRE.

The Ohio State game was away. This is the first time most folks will have to greet the teams.

For a noon game in September, Enter Sandman is going to be INSANE.

-Any mention of last week (WOOOOO!)

Fact: We beat OSU!!
Response: Since we’re fans, we can keep talking about it.

Fact: We’re also ranked again!
Response: Somehow, OSU is ranked ahead of us in the Coaches Poll, though.

Fact: In 82 years of existence, ECU has been through 20 coaches. Good for an average of a little over 4 years per coach.
Response: To put it in perspective, Beamer has coached VT for 25 years, more than a quarter of the ECU football program’s life.

Fact: We found this gem of an ECU coach getting ready for game day. (Insert the pic)
Response: He was heard asking about the new movie Constipation, indicating it hadn’t come out yet.

Fact: ECU is a huge pain in our ass, having either beaten or played us close over the last 5 seasons.
Response: If there were ever a “trap game” this would be it. Though I get the feeling we blow them out of the water this year.

Fact: ECU QB Shane Cardin is actually pretty good.
Response: We actually have a QB that is pretty good as well! Oh and if you look at last year’s stats, we absolutely decimated Cardin. He was 19/31 for 158 yards, 1 TD, and 3 picks. We also sacked him 7 times in the game.

Fact: We’ll beat ECU by 20 or more.
Response: Just bank on it, bitches. 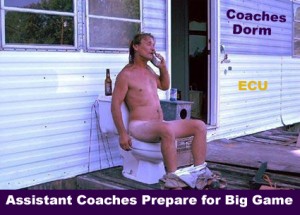 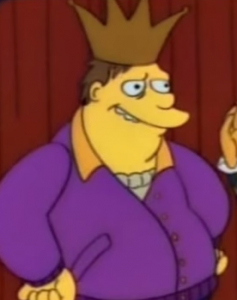 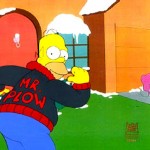 Almost every game, D_w submits a Zombie Kill of the Week. Almost every week. He definitely stepped up to the plate after that win, though.

Two weeks in a row?! No way.. Pretty sure that didn’t happen last season, but then again, the Hokies made some chances from last season, so why shouldn’t we?  Well I was at a Fall Wedding on Saturday, but not to worry, I watched the first quarter on the phone (thanks WatchESPN App), listened to the 2nd quarter on the radio, and watched the 2nd half screaming at the TV in my basement! So very little hokie football was missed. This week, Bill Roth helped me pick the Zombie Kill, since he was pumped up during the play I had to go find it when I got home.. Here it is.. #34 Kyshoen Jarrett clearing the way for a nice punt return.  I also picked this one because I was too lazy to go find another one, good thing The Voice of the Hokies was pumped otherwise I would have just given the zombie kill to the entire team and posted a picture of CGally at the beach.

-The Big Ten is so bad, they’re thinking of hiring Goodell to turn things around.

-Last week, the USC Athletic Director went from his box to the field to argue a call. Are you freaking kidding? How unprofessional is that? And this dude is going to decide which four teams get into the playoff?? Get ready to see Notre Dame every year they have a winning season.

Each week, the Carnegie Mellon Football Analyst submits his own Hokie..something. But this week he was too busy / drunk watching the Steeler game. So we’re just going to post one of the best Hokie pictures of all time. 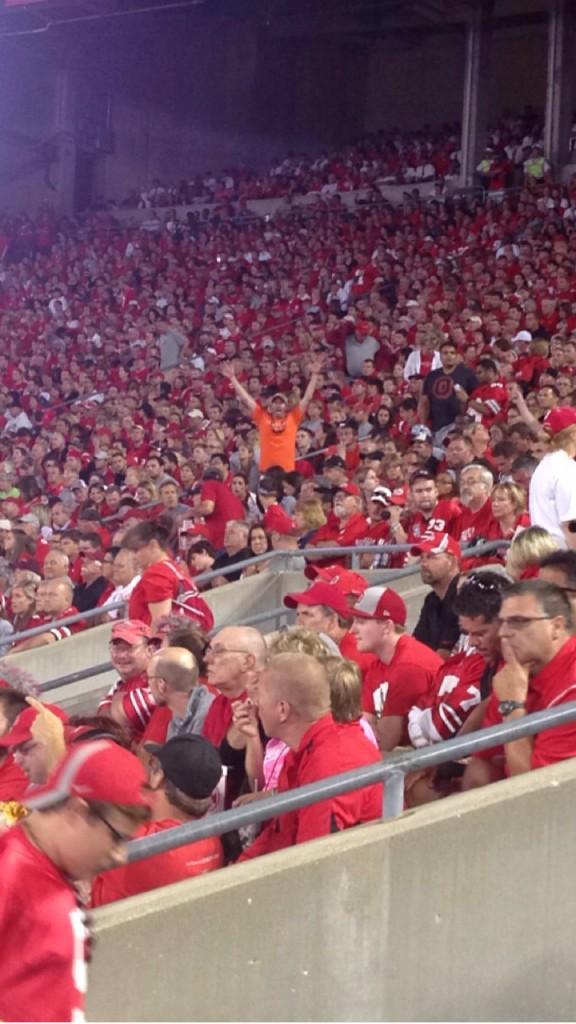 Update: The CMU Football Analyst comes through less than 24 hours before game time. 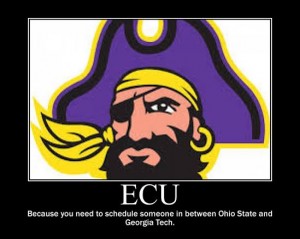 This year is all about exorcising some demons. So we’re going with Ghostbusters this season. If you don’t like it, you’re wrong. So what did we think would happen is we went into Ohio State and won?

Ray: What he means is Old Testament, Mr. Mayor, real wrath of God type stuff. Fire and brimstone coming down from the skies! Rivers and seas boiling!

Winston: The dead rising from the grave!

Last week… WE ALL WON!

Every prediction, including every comment, correctly picked the Hokies!

WE ARE ALL THE BEST!!

On to this week’s picks!

D_w: The hokie bird is still hungover from partying in Columbus after the game, he tackles the ECU pirate and pummels him while muttering something about poor treatment of parrots… oh and of course Bud Foster gets fired up because he doesn’t like the defense being out shined by the offense, leads to a 42-10 hokies win.

The Northerner: Call me crazy, but I think this team may have turned a corner and won’t have a hangover from OSU. I only say this because, for the first time in however long, they finished a damn game and played all 60 minutes. It was…beautiful. Anyways, ECU doesn’t look terrible, they only lost by 10 last week. I’ll go with 42-17 Hokies. The second TD for ECU comes in garbage time, and the Hokies run away with this one.

Wright: Perfect game for a letdown. We don’t let it happen, though ECU hangs around. 30-17 after a late turnover recovery in the red zone.

B-Dubs: No fluke win over OSU even as much as Herbstreit and ESPN want it to be…assclowns. Hokies take the wind out of the Pirates sails and cruise away with a 34-6 win.

Hokiesmash: TIME TO HOP ON THE HOKIES HYPE TRAIN, MOTHERF*CKERS! ALL ABOARDDDDD!! CHOO CHOO! THE HOKIES DEFENSE IS GOING TO PUNCTURE MORE HOLES IN THE ECU OFFENSIVE LINE THAN CANNON FODDER FROM CAPTAIN JACK SPARROW’S SHIP. THAT’S A PIRATE REFERENCE SINCE WE ARE PLAYING THE PIRATES (GET IT?!). HOKIES WIN 31-14 AND MICHAEL BREWER HOOKS UP WITH A KEIRA KNIGHTLY LOOKALIKE IN THE PROCESS.

The Bull: 1718 – men acting under the orders of Virginia Governor Alexander Spotswood invade North Carolina and defeat the pirate Blackbeard. 2014 – another group of Virginians, this time Hokies under the command of Frank Beamer, defeat the ECU Pirates 24 – 13.

Hokie Ambassador to Lebanon: The hangover from OSU is going to last through most of the first half, but Tech turns it around in the second. Hokies roll, 34-10.

CMU Football Analyst: I’ll try to actually put some analysis in this. The Hokies have won the previous 4 meetings against ECU. That trend will continue as VT wins 27 – 16.

G-Way: I’m gonna be craaaazzzyyyy and say we break 50 after ECU has no idea what hit them on either side of the ball. Hokies 52-Pirates 20.

Did Herb Brooks come through for us last week or WHAT?

This week, we have to keep the momentum going.

And who’s the man that give you just the support you need? 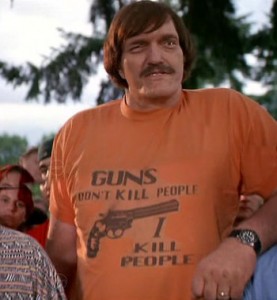