Do we have a rivalry with East Carolina?

Others say “Shut the hell up”.

Absolutely no reason for this song. We just like it. 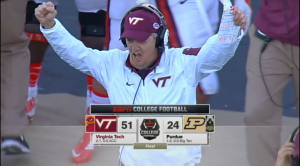 That game had everything except a decent opponent.

Seriously, it was fun, but Purdue is GARBAGE. And they kept it pretty damn close for too much of that game.

Against all expectations held by every member of the NEZ, Motley looked not awful.

We know that sounds snarky, but it might be exactly what this team needs.

Unfortunately, the biggest thing we need him to do is avoid making big, big mistakes. Like a scoop and score from the red zone. We’re not sure if that’s his fault for not recognizing the blitz, but it happened, so it’s on the offense one way or another.

But holy shit the special teams. Talk about bi-polar.

Can we get one freaking punt returner that doesn’t have the decision-making skills of a drunk freshman?

And what happened to our touchbacks on kickoffs? Is Slye slightly hurt, or are we just saying “screw the touchback, our special teams can tackle!”

We assume it’s the latter, because that’s a dumb strategy and exactly what our coaches would do.

But hey… BLOCKED PUNT FOR A TOUCHDOWN!!!!

We know two things about ECU:

1. They beat us last year after what we’re calling the best win in Virginia Tech history.

2. They aren’t as bad as Purdue, but they also suck pretty hard,

Is Navy any good? Well, we haven’t seen them play once in the past five years but…. No. No they are not any good.

Plus they’re the Pirates, and everyone know there’s only one team that deserves that name:

THE GREATEST BASEBALL TEAM OF ALL TIME 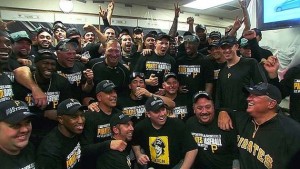 Did you say playoff-clinching baseball team?

East Carolina has beaten the Hokies twice since 1993. Both times, Tech was ranked 17th.

(Can’t believe we’re bragging about that, but whatevs)

Looks like it’ll be better luck next time, East Carolina.

For the second week in a row, Hokies go on the road to hear chants of “LET’S GO HOKIES” from the crowd at 3:30.

Let’s start with the simple fact that Greenville is a terrible city. It’s full of lunatics, criminals, and is just downright dirty. The place seriously looks like the ruins of a nuclear apocalypse and is just a terrible skidmark of Eastern Carolina society. But I digress…

Other than that, though, it seems unfair to hate on a school that I know nothing about other than hey always seem to be a huge pain in the ass when we play them in football. WHY ECU…WHY?! You’re worse than anyone who roots for the Patriots.

What can be said is that they’re 1-2 and have lost to Navy and only beat Towson..f*cking TOWSON by eight points. That’s gotta mean something, right?

Well this was the worst attempt at facts ever. It gets easier from here since we’ll start playing schools I know. This is why these facts only have to be “acceptable.”

-You hear any type of Hokie cheer on television

This week, he submits what I’m pretty sure is his finest work ever. 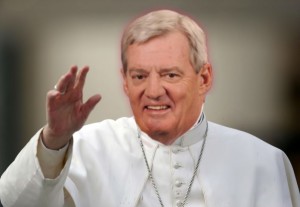 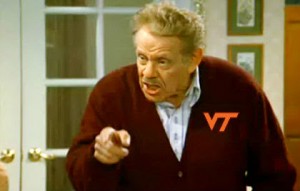 I’ve been waiting on this one for a while, but the rage has built up to incredible levels.

This week’s rant is on the devil incarnate:

Many of you may be wondering: What the hell is Cablevision?

Well, in certain areas of the northeast, you can’t get Verizon or Comcast.

“GREAT!” you would say. “THOSE COMPANIES SUCK!”

But trust me, you do not know suck until you have Cablevision.

And with my cable, you cannot rewind live TV. You have to be recording it, then be watching it through the DVR menu and not change to any other channel.

It’s unbelievable to me that this exists in today’s world.

2. “Well Mr. Editor, why don’t you just pause TV for a while, then hit play? It will record and you can jump back.”

That would be a nice solution, but for one problem: when you pause TV (which frankly, I’m surprised you’re able to do with this shit stain of a cable setup) and restart from the pause, the cable box will jump to live TV on the hour and half hour.

Who f*cking designed this shit?? Did they not think that this would be a f*cking problem?? Do they think no sports fans would want to possibly not get spoiled by future action?

4. There’s no 30 second (or 10 second or ANY second) skip forward button. You don’t know what you got til it’s gone. Counting Crows, you were so right.

5. When you select a show on DVR, the cursor jumps first to the “delete” button. Just… WHY?

Ok, so many those last two were weak, but come on, YOU CAN’T REWIND LIVE TV??? DID I MENTION THAT?

Well… I thought that would make me feel better, but no, I’m still angry. So glad we have such a great competitive marketplace for cable television. 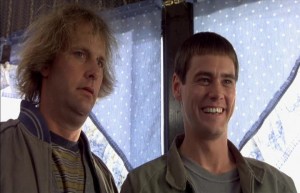 DiP: [Ed. Note: DiP submitted a two sentence prediction that contained 3 spelling errors. Did you know he actually used to “write” for us?]

The Northerner: Too drunk… again.

Wright: We get a nice buzz off of the Purple Haze and force a turnover on the first defensive series. Motley has 4 total TDs and Hokies win 34-16.

CMU Football Analyst: I think this is going to be closer than we think. Hokies pull out the win on a last minute field goal 17-16.

NEZ Ambassador to Lebanon: Too busy saving the world and stuff

Maniak: VT wins by the number of liters of beer I’ve had at Oktoberfest. … 7!

G Way: Wait, we’re still playing ECU? I thought that series was over. What’s that you say? We’re playing them every season through 2025 (except, for some reason, in 2021)? Sounds like a great idea.

These bastards always seem to play us close for some unknown reason. Probably because they’re angry their mascot’s a pirate. This year will be no different, but the Hokies take the W after a strong defensive performance and just enough offense to get us by, 23-17.

C Gally: Hokies continue their domination streak and smack these fake pirates around so badly, this game will be rated R… No, not “arrrrr” like a pirate, movies aren’t rated like that.

Were you aware that your humble editor’s favorite baseball team is the Pirates?

Probably not, I never ever mention it.

So to beat these Pirates, we need the best Pirate of all time. 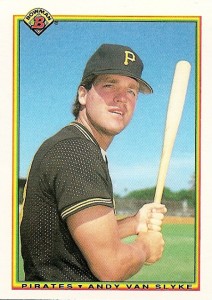 If you don’t know who he is, you should be ashamed.

Also, his kid plays in the majors, which makes me feel VERY old.