Everyone still hungover from Monday night?

Well, that first half was great, right?

Let’s start out with what we think is obvious: If Brewer stayed healthy, we still would have lost.

Our defense just had no answer to the all-star team Ohio State has assembled.  They’ll roll through the Big Ten like it’s the worst conference in the country. Which it is.

Tech capitalized on great opportunities in the first half and managed to snag the lead at the break, but you’re kidding yourself if you really thought that would hold, even without the injury to Brewer.

But man, Lane was ROCKING. We really wish ESPN would have actually shown how much it was rocking, but more on that later.

So yes, the Hokies once again lose a match-up with a top nationally-ranked team early in the season. Back to usual we suppose.

Everyone nice and depressed now? Great, gonna go even further.

Obviously, we feel awful for Brewer, who was playing decently enough. We don’t really remember much as we took a shot for every pass thrown behind a receiver.

But are we all in agreement that Motley sucks? Not trying to disparage him, but it doesn’t appear that he’s a very good quarterback.

So considering that, the last decent quarterback Virginia Tech recruited out of high school was Tyrod Taylor.

Remember during that time how we said that we needed a change on offense, and all anyone said was “TEN WIN SEASONS!” Well this is what happens. You slip into mediocrity and you wind up with a shitty offense that no decent quarterback wants to play in.

So now we have Brewer hurt and no one to replace him. Not that you plan for injuries, but one would think that, with a senior quarterback about to graduate, recruiting a serviceable guy would have been a priority 2 years ago.

Anyways, this could be a long, long season. We’re honestly not sure how this offense is going to score points.

Will the defense be able to step up literally every game and bail them out? WHO KNOWS?!?!

Find out each week on “Frustration TV: 2015 Virginia Tech Football”

What we know about Furman: Their mascot is the Paladins.

Well, we’d be surprised if you didn’t know already, but the paladins, sometimes known as the Twelve Peers, were the foremost warriors of Charlemagne’s court, according to the literary cycle known as the Matter of France.

Did you seriously not know that? Read a freaking book once in a while, jeez.

The paladins were also the bad guys in that terrible Jumper movie with the brunette from The OC.

The last time these two teams met was in the second week of 2008.

You may remember this as the game after Sean Glennon played so badly against ECU that we burned Tyrod’s redshirt MID-GAME. Ah memories.

Hokies are undefeated in the 5 games, including a riveting 7-6 win in 1942. SEC fans called it a great defensive battle.

Well, I’d like to start this column by saying FU!!!!!! No seriously. FU all. FU all the way to Greenville, South Carolina and back. FU.

But I digress. Moving along. Furman has dudes on their team named Aaquil Annoor, Adekunle Olusanya, and Chinedu Okonya. Darryl Jenks wants to know, “What kind of games do you play in Africa? Chase the monkey?” Upon further review, however, these guys are from Nashville, TN; Tampa, FL; and Riverdale, GA. Jokes on you, Darryl – you AND your mother f*cking soul glo! THEY PLAY SOCCER.

They also have guys named Quandarius Weems, Jon Croft Hollingsworth, Preston Furry, and Jacque Evangelister on the squad. This fully confirms that Furman is clearly fielding a polo team with halftime snacks to include tea and crumpets.

I also failed to recognize that schools like Furman still have rivals. For example, their primary rival in football is Wofford. Yes Wofford. I was reading the Wofford football board with its 6 participating members, and one won’t even let his daughter wear purple because he “hates them more than the annual colonoscopy” he gets. Um, yikes. Probably the last time I’ll ever read that board.

BUT there’s history in SC! Furman/Wofford was the FIRST EVER football game played in SC. That’s history NOBODY can take away from them. Though I doubt anyone really gives a flying f*ck about that.

In other news, Sigma Alpha Epsilon (SAE) is still the worst fraternity EVER. Why bring this up? Because recently, “SAE has continued to disregard policies, procedures and standards of behavior required on our campus and by their national headquarters.” Shocking. I heard a story once while at VT – that a handful of guys were arrested and thrown in jail. As it turns out, two or three were SAE fraternity brothers and DIDN’T EVEN KNOW IT. Talk about a brotherhood.

Fun (and useless) fact: Furman University has been given the speech code rating Red. A red light university has at least one policy that both clearly and substantially restricts freedom of speech. Those bastards!

So much for focusing on Furman football facts. But this was a lot more fun. But, in keeping with the spirit of this section – no matter who at QB, we should still romp this team.

-Shots of Brewer on the sideline looking angry

-You see an actual Furman fan in the crowd

This week, he goes with, quite literally, the best photoshop this site has ever posted: 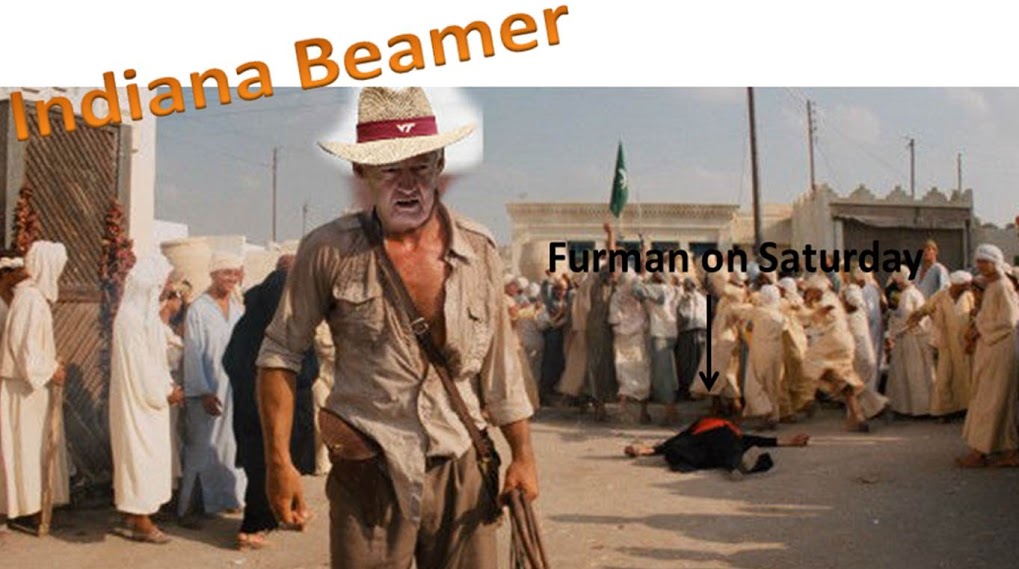 Black letters on dark background? Still. BEST PHOTOSHOP EVER FROM THE NEZ.

Holy shit did ESPN botch the entrance on television.

Lane was absolutely on FIRE for Sandman. Best entrance in sports. How can you possibly screw it up?

Second step: As it’s picking up, cut to a random f*cking shot of the opposing coach walking out of the locker room for a super long time. Totally gives everyone at home the experience of being there.

Third step: Literally the climax of the song, when flags are raised and the team runs onto the field…. we get a shot from the tunnel of people standing around.

It was f*cking unbelievable. Honestly, nothing in the game pissed me off nearly as much as how badly the screwed the pooch in what was probably the loudest entrance in Lane Stadium EVER.

No one won last week. No one was close. Not even going to talk about it.

The Northerner: We struggle on both sides of the ball because we’re still reeling from Monday’s hangover. Furman moves the ball well in the first half before we get back into the groove and do something worthwhile. 24 – 13 Hokies

Wright: Motley gets benched and backup outshines. Running game is actually productive and good guys win 26-10 in a game that’s eerily similar to the JMU game a few years ago. Hell, they even have purple as one of their colors (now that’s a Lee Corso-type factoid right there).

B-Dubs: FU, Paladins. Lawson makes his first appearance at Qb and doesn’t look back while Bud and the boys do something that makes even Taylor Swift’s music seem like a good thing. Hokies roll 425-0. And no that’s not a typo.

NEZ Ambassador to Lebanon: The defense comes to play. The offense does not. Hokies win 30-3 with a pick 6, a return for a TD and a safety.

Maniak: Hokes win 13-9. C Gally shits in his hand and eats it. [Ed. Note: One of those things will absolutely not happen.]

Token Girl: We have 5 quarterbacks on the roster…5. 40-9 Hokies, with 3 quarterbacks playing, along with 2 wide receivers that have been groomed into QB’s over the last week.

G Way: Hokies dominate 48-10, once again providing false hope for the rest of the season.

Ok. Time to get back on top.

Last week sucked. This week we get our shit together.

We need someone to fix this. 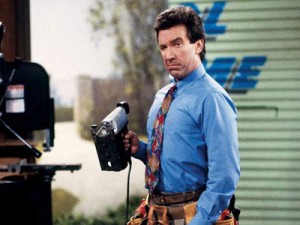 Is he not actually good at fixing thing? Sure.