Side note: TOTALLY forgot that LeBron was in attendance! BAHAHAHA!

We have a habit of starting out with Coheed. If only they had a song that would be appropriate for coming home after a big away win last season….

Hot damn it feels good to be previewing so Hokie football again.

Did you know that we got so desperate for sports this summer that we actually watched some BASEBALL?!?! Honest to God! BASEBALL! It was torture!

But all of that is behind us now. It’s freaking football season. So let’s jump right in!

Holy shit balls, this defense is going to be unbelievable this year.

Our front four is for sure the best in the country.

Ekanem, Maddy, Marshall & Dadi. (IT RHYMES!) They legit might kill someone this year.

Secondary is stacked. Linebackers are solid. Will the defense actually outscore Brewer this year? ANYTHING IS POSSIBLE!

Speaking of Brewer, here’s hoping his concussion from last year’s Ohio State game that no one wants to talk about has dissipated.

Because let’s be honest: this offense goes the way Brewer goes.

It’s as simple as that.

If he sucks, the offense sucks.

If he manages to be mediocre, not screw up, score a few here or there and let the defense win us games… well that’s probably the best we can hope for.

If he’s great, we’re national champs without blinking an eye.

Take that to the bank and smoke it!

Let’s start with the suspensions.

The Buckeyes will be without 4 of their players on Monday. Ohio State decided that, although they’re the highest paid football team in the state of Ohio, players can be suspended for basically any other reason.

Their biggest loss DE Joey Bosa, who was suspended for this haircut/goatee combo: 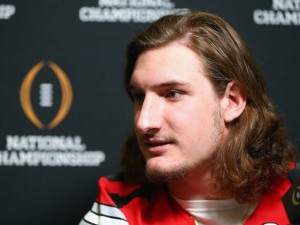 His girlfriend finds his hairclips ALL OVER her apartment.

So remember that time Virginia Tech didn’t recruit a QB for 7 years between Tyrod and Brewer? Ohio State currently has 3 Heisman-caliber quarterbacks on the team.

Luckily, they can only play one at a time at that position.

Super-obvious key to the game: Get who ever is playing quarterback to not play very well.

North Endzone analysis that you came for right there.

Our ten dedicated readers will recognize that we’ve never done a series bit before. But this opening game has such a rich history of tradition, we felt it was important to include.

Since college football started in 1869, Virginia Tech has NEVER LOST to Ohio State.

That’s almost 150 years without losing ONCE to the Buckeyes! That’s insane!

In fact, did you know that the Hokies have an average margin of victory of 14 points per game over this supposed college football power house?

The series is clearly in Virginia Tech’s favor, and there’s no reason to expect 150 years of history to change any time soon.

The bigness… largeness… The biglargeness of this game cannot possibly be overstated.

The hype train has left the station, jumped the tracks, and continued jumping because Enter Sandman was on.

Lane Stadium is going to be on FIRE.

You can expect an ESPN Sandman intro, and it will make your face melt.

If Tech can use the momentum to stay in the game early, expect us to be in the game the whole way through.

Other than that, we don’t have much to say.

Fact: Cardale Jones tweeted in 2012, “Why should we have to go to class if we came here to play FOOTBALL, we ain’t come to play SCHOOL, classes are POINTLESS.”
Response: NEZ has recently learned that when he tweeted that he had just taken a Sociology exam and earned a “D”. Cardale was simply expressing frustration because he read so much for that class. Nah, just kidding. He wasn’t reading at all.

Fact: Remember when Urban Meyer announced his retirement in order to spend more time with his family has his gastroesopheageal reflux disease?
Response: That was before OSU offered him that $4 mill a year contract. We’re now taking bets on whether his wife divorces him or he suffers another heart attack first.

Fact: A buckeye is actually a ridiculously poisonous nut.
Response: No seriously. It’s Latin name is Aesculus Glabra and it’s really not good for anyone.

Fact: Urban Meyer provided guidance to Aaron Hernandez during his college years and during shooting spree #1.
Response: That Urban is a classy guy. NEZ also found out he still maintains Aaron is innocent and that he could never do such distasteful things.

Fact: It’s always THEEEEEEEEEEEEE Ohio State.
Response: I get it. That’s actually the name of your university. But c’mon, I was talking to a coworker the other day in the elevator about Labor Day and how I was ready to watch the Hokies win. He said “Go Buckeyes!” So, I asked, “You’re an Ohio State fan?” And he quickly responded, “Nope. Theeeeeeeee Ohio State fan.” Oh whoops, my bad. I guess I forgot to sound like a f*cking idiot.

Fact: Yes, they won the national title last year.
Response: But the HOKIES still beat dat ass and will do it again this year.

-You see a highlight from last year’s game because WOOOOOOOOOOOO!!!!

-An SEC team is mentioned

-THE FULLERS ARE BROTHERS OMFG!!

You know what? The more I think about it, I don’t know why we thought a guy that went to Carnegie Mellon would possibly give us any insight into college football. Your humble editor went to CMU, and do you know how many classes involved college football? NONE. NONE CLASSES.

Then again, no school in Pittsburgh really cares about college football.

Anyways, onto the CMUFA submission of the week: 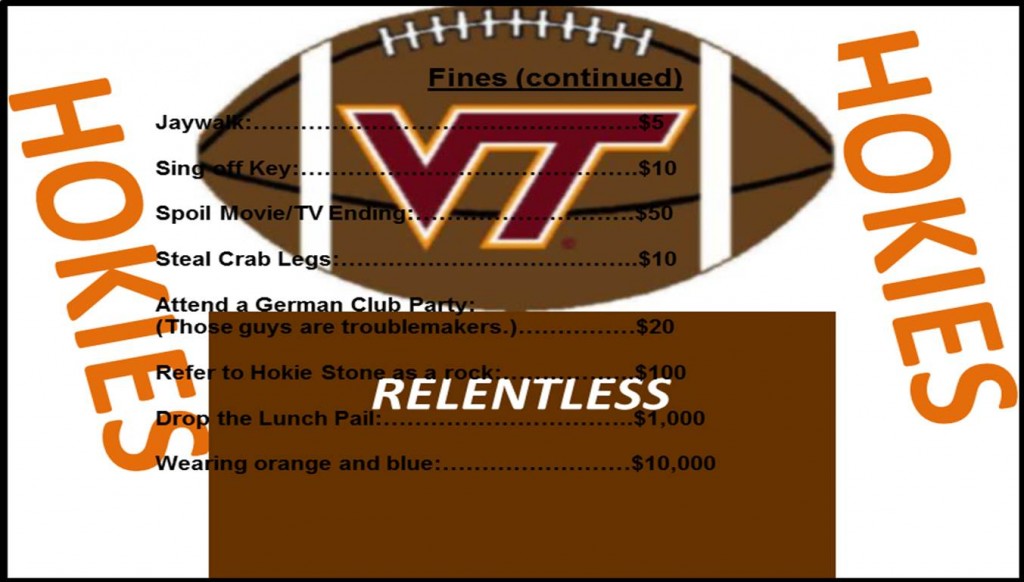 Referring to the Hokie Stone as a rock should be punishable by something out of Game of Thrones.

I was going to write a rant about moving, but as I’m sitting here watching the TCU / Minnesota game, I have a much more important issue.

Football announcers that DON’T KNOW THE F*CKING RULES OF FOOTBALL.

As Minnesota was about to score a touchdown, the running back (or receiver, I don’t really care) fumbled the ball into the end zone.

The defender recovered the ball while sliding out of bounds.

The announcers spent a good 5 minutes checking to see if the defender recovered it before going out of bounds.

It’s a touchback either way! HOW DO YOU GET PAID FOR THIS WHEN YOU DON’T KNOW THE RULES?!?!

This is a nationally televised game! People are watching!

I wish this was the exception, but it seems like half of the announcers in college football are either watching a completely different replay than what fans are seeing or straight up don’t know the basic rules of football. And it is infuriating.

Aaaaaaand they just showed a commercial for the UVA / UCLA game.

Do they have a mercy rule in California?

My only rule is that if you pick Ohio State, you’re banned.

D_w: Hokies win 20-13.. Two TDs for the defense and a pair of field goals.. yet again the defense spends more time on the field than the offense does and Bud decides at the end of the game that the offense is no longer needed and that his squad will plan 100% of the time from now.

The Northerner: Our defense struggles mightily and we get down by four scores.  Brewer and our offense bring the thunder and come roaring back to win by 14.  Bud Foster rips a goal post in half while Beamer does a little jig.  45-31 Hokies.  Orrrrrrrrrrrrrrrrrrr…

We win 17-10 because our defense holds up like they do most every time, while our offense sits on their collective thumbs and spin. Defensive INT for a TD and a miraculous offensive TD give us the win.  We let the kicker get some action, too.

Wright: 24-19 Hokies, sack/fumble late to seal it. This could be the game in recent memory with the best chance to be as electric as the 2003 Miami game.

B-Dubs: Buck the F*ckeyes! I’d rather take a shower at Penn State than follow anything Ohio State. Bud’s crippling defense coupled with a tolerable offense will have the Hokies making Urban their beyotch for the second straight year. VT wins 24-14!!

CMU Football Analyst: Is there a fine according to the VT football fine structure for picking against the Hokies? Something in the realm of drawing a personal foul penalty maybe. I predict the same outcome as last year. VT:35 – OSU: 21.

Side Prediction: ‘riot’ in downtown blacksburg results in black eyes, one busted window and a grown man running around in his skivvies screaming FUCK CGALLY!!!  [Editor’s note: It wouldn’t be the first time.]

Token Girl: While VT winning by 50+ points is tempting, I’m going to go with 28-24 Hokies….ditto on major riot in Blacksburg.

G Way: Hokies shock the world and win 20-17 on a last minute field goal set up by some late defensive heroics.

C Gally: A big hit early amps up the crowd, followed by a defensive touchdown. Hokies ride the momentum to victory and drink Buckeye tears for many years. Hokies win, 24-17

Last year’s victory was, in your humble editor’s opinion, the biggest win in Virginia Tech history at the time.

Not necessarily the most important win (that goes to beating Texas in ’95), but certainly the biggest… at the time.

We use the qualifier “at the time” because we all know we went on to have a very mediocre season.

It was so bad, the only time we were mentioned in the national conversation was when people couldn’t believe that Ohio State could possibly lose to a team as bad as Virginia Tech.  …ok typing that made me kind of depressed.

Last year’s win came out of no where. This year, we are expected to get turbo stomped.

Everyone is saying that the Buckeyes are out for blood. That they are so pissed off they lost in the horseshoe last year that they are going to show no mercy.

Which is exactly why a victory this year would immediately jump to the biggest win in Tech history.

So who better to lead us this year… than the one that led us last year: And that’s what you have here tonight, boys.

If we played ’em ten times, they might win nine.

But not this game. Not tonight.

Tonight, we play with ’em.

Tonight, we stay with ’em, and we shut them down because we can!

Tonight, we are the greatest football team in the world.

You were born to be football players — every one of ya.

And you were meant to be here tonight.

This is your time.

I’m sick and tired of hearin’ about what a great football team the Buckeyes have.

THIS IS YOUR TIME!!

NOW GO OUT THERE… AND TAKE IT!!