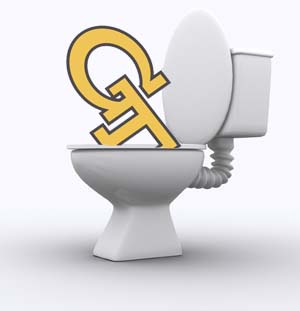 ENTER SANDMAN AND THURSDAY NIGHT GAMES IN BLACKSBURG: THAT'S WHAT VIRGINIA TECH DOES!!

…wait… our only Thursday night game is on the road?

….against one of our biggest rivals?

…on a short week?

Scheduling geniuses. That's what we have.

But it's the Georgia Tech game!

If you can't get up for kicking some Paul Johnson ass, we feel bad for you.

Smack destiny in the face.

We realize that we've been pretty negative lately, but hot holy shit. That was horrid.

Yes, we know it was raining. But from where we sat, Marshall certainly looked like the better team.

Just the week before, Ohio scored 31 on Marshall. The used-to-be-perennially-ranked Hokies managed 21 before over time.

Our biggest problem is that we can no longer chalk this up to "just a bad game." This is now a systemic problem with our football team. For three years now, we have started a tight end at quarterback. No one saw this as a problem? How many seasons in a row with 10 wins, and we couldn't recruit a mother f*cking quarterback?

We want to be clear here and say that we are NOT calling for Leal (at least, C Gally isn't). While I wouldn't place much trust in our overall offensive strategy, I would assume that they've seen enough in practice to know that Leal isn't going to get it done.

There. We said it.

We wish he didn't. This isn't a "we told you so" situation, because we had faith. Hell, after the 2011 season, everyone did.

But we were wrong.

We haven't seen a regression like this since Vanderjagt missed that field goal against the Steelers.

Yes, his receivers aren't helping him out. But I imagine it's tough to recruit top receivers by telling them that they will be constantly led into bone-crushing hits by a guy that didn't start passing the ball until 2 and a half years ago.

And some of the play calling leads me to believe that Voldemort still has a hand in this offense. 4th and a yard with a 200 lb QB who's only strength is running the ball? Better go shotgun for a QB draw that EVERYONE WITH EYES saw coming. Oh, it was stopped by the entire defense crashing the line of scrimmage? Shocked.

Ok… rant over. We feel better.

Zero points given up in the second half. INCLUDING OVERTIME. That is some Bud Foster kick ass shit like we haven't seen. Well, we see it all the time. But it's still awesome.

AND WE BLOCKED A PUNT!!! FOR A TOUCHDOWN!!

On the other side of special teams, apparently Cody Journell was suspended for general douchiness. Or missing field goals. Or something. We probably shouldn't be kick any more field goals. We have missed the last FIVE attempts.

We wish we could suspend every punt returner that refuses to fair catch the damn ball. They know that's a rule, right? You're allowed to wave your hand and the other guys can't hit you?

For a game in which we had TWO blocks, our special teams is in more disarray that we can ever remember.

We don't really know much about Georgia Tech this year. Shockingly, we have better things to do than watch them play Duke or UNC*.

*Things include but are not limited to drinking, cleaning the garage, and going to the dentist.

We assume they have the same bullshit, gimmicky offense with cheap ass take-your-knees-out blocking as always.

Is there anyone more annoying to look at than Paul Johnson? 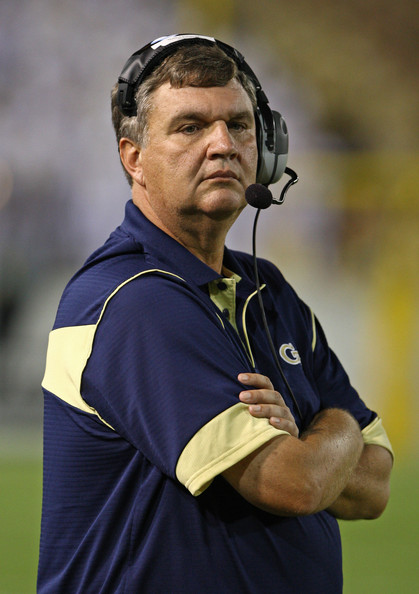 Don't lie. You REALLY want Logan Thomas to throw the ball away right in his stupid face.

It would probably be an overthrow anyways. (d_w edit: DRINK!) 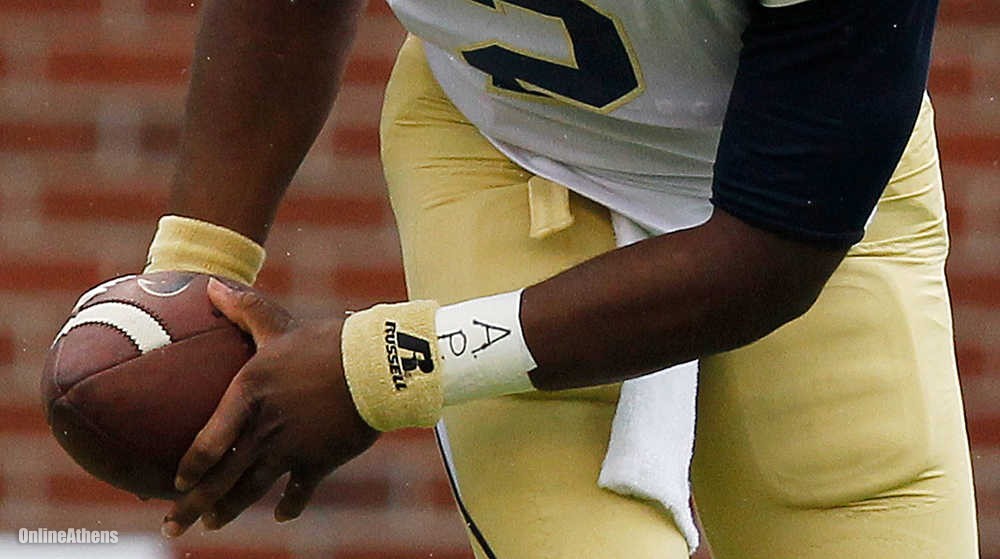 People claimed it was in protest of the NCAA. We just think he's a big fan of the Kwik-E-Mart.

We'll know if this week he wears a wrist band with "Nahasapeemapetilon" on it.

Last week, we said the following about the Marshall game:

If we STILL can't get shit going on offense, it could be a very nerve-wracking game.

Go ahead and call off work on Friday.

It could be a long, drunk game.

And how could we not address the helmets we'll be rocking out? 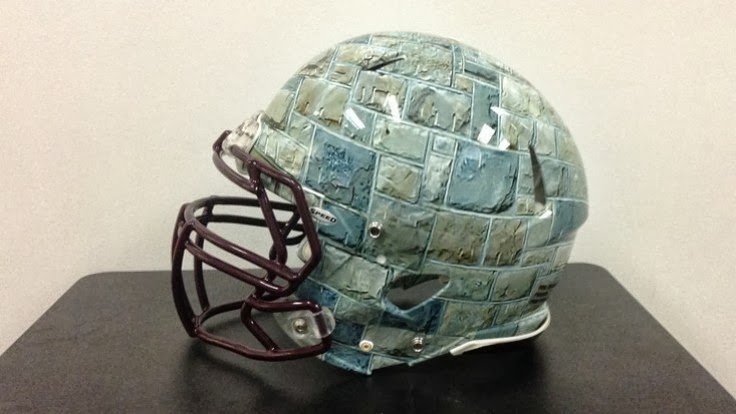 Hokie Stone looks AMAZING… on buildings. Or hanging above a doorway as you run out onto the field… or above the door leading to your driveway… or on the way to your daughter's nursery.

But on a helmet? Yeaaaaaaaah… Not so good. Maybe they will look better in the game? Maybe?

Fact: Jimmy Carter went to GT.
Response: That's cool. I'd be proud of that.

Fact: John Heisman, after trouncing GT 73-0 as the head coach at Clemson, took over at GT for an annual salary of $2,250 a year along with 30% of all ticket sales.
Response: Today that would be the equivalent of $55k…needless to say, Heisman was way underpaid considering he led GT to 104 wins in 16 seasons along with their first national title. I can't imagine 30% of ticket sales really amounted to anything. How many fans could a stadium hold back then? Probably the equivalent to how many people actually read this blog.

Fact: Their mascot is a bee.
Response: That's f*cking scary. I hate bees.

Fact: We're 7-3 lifetime against GT and have won the last 3 years.
Response: Our defense better come to play because ain't no way our offense is gonna put up points. This streak might come to end on Thursday.

Fact: Someone had a great idea to schedule us against GT on a short week.
Response: F*ck you, Weaver.

We all know his favorite fan…. 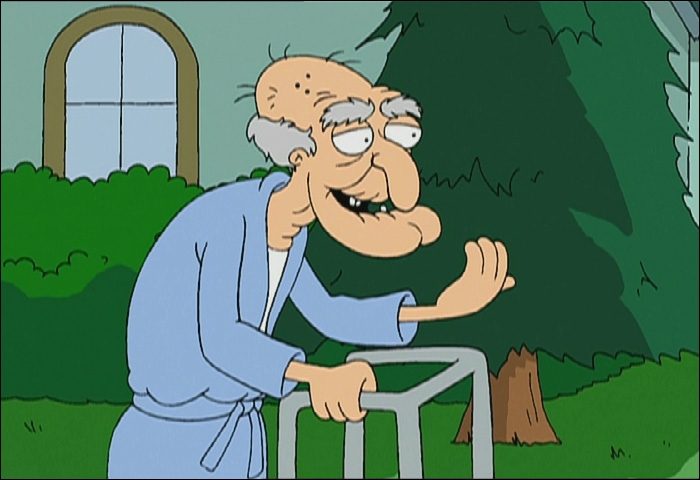 Is this the week we actually had one? Maybe. I don't know, I don't read anything these guys send me.

We have officially completed 4 weeks of Hokie football. I’d like to say something funny or entertaining or even optimistic about the first 4 weeks, but Saturday’s game almost killed me.

A 3OT win over Marshall? 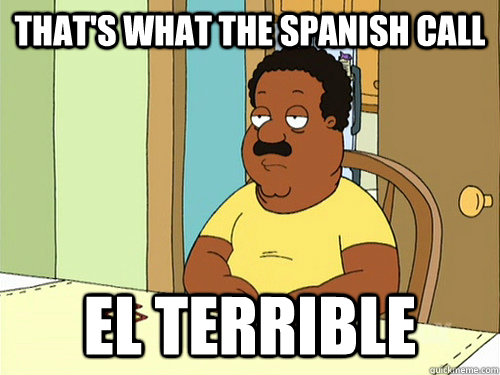 But it could have been worse. You could have been a WVU fan who drove to Baltimore to sit in the rain and watch their team get dismantled by the Terps. THE TERPS!! That trip was a no win situation…

You have to watch the Terps play… Strike 3

Ok, so on to the Zombie Kill.

I know what you’re thinking: there wasn’t a Zombie Kill from that game. But there was! And the only reason you don’t remember is because you were too drunk and angry at this point in the game to realize what just happened.

This week’s Zombie Kill goes to #34 Kyshoen Jarrett. Not only does he lay out the Marshall WR, but he gets the INT in the endzone to keep the game tied.

Here at NEZ we like to take credit for anything we can, so we are attributing Kyshoen’s elevated Zombie Killing to watching the motivational video of Tallahassee we posted before the Marshall game.

Now we just need him to share the video with the rest of the team and maybe we will have some more candidates for Zombie Kill of the Game.

-Your humble editor fully expected his WVU friends to give him all kinds of shit about Marshall taking us to 3 over times. NOOOOOOOPE!

-Nothing else is happening in college football. Except we are still receiving votes in both the Coaches' and AP polls. These polls should be invalidated immediately.

Yeah, we'll give you a new one, but first…

This week, we give you a perfect representation of West Virginia football right now*:

Each week, the Carnegie Mellon Football Analyst submits his own Hokie..something. This week, he makes a stretch to utilize a great picture of the greatest man to walk the earth. 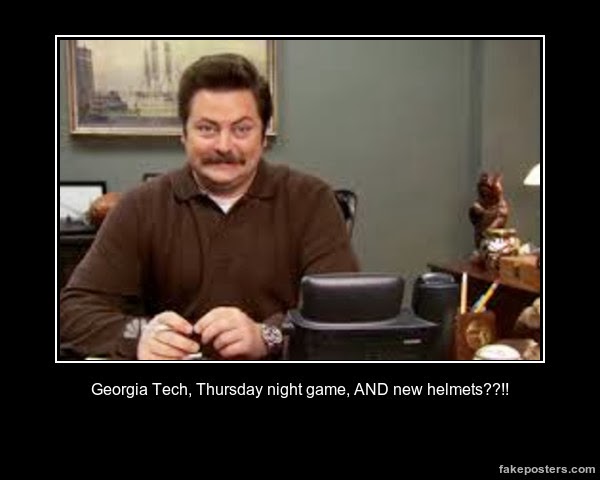 Was there any way we WEREN'T going to call him up? 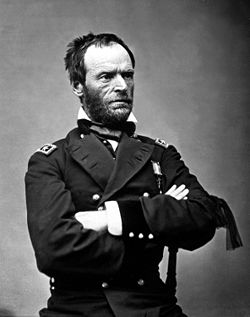 "…in August, Sherman 'learned that I had been commissioned a major-general in the regular army, which was unexpected, and not desired until successful in the capture of Atlanta.'"

And then he captured Atlanta, and burned it to the ground.

To the f*cking GROUND.