What the hell happened last week? We just woke up.

Join us in our journey back to consciousness, after the jump.

With two more wins and a Duke loss we can make the ACC Championship Game?

WHAT WORLD ARE WE LIVING IN?!?!

So, let's recap our feelings after the Miami game…

Yup. That about sums it up.

There must have been dozens of people disappointed in that stadium last Saturday.

And we feel bad for absolutely none of them.

HOLY SHIT BALLS WHO WAS THAT TEAM??

We actually scored points off of turnovers. And WON! Who would have thought?

Sure, we gave up huge returns that resulted in crazy turnovers. But in a sloppy game like, that the key is to capitalize on your opportunities.
And we did.

Logan Thomas looked similar to the Tank Engine we used to love.

Now, one game does not make up for a season of absolute shit. But it was super fun to watch.

Also, Cody Journell was dismissed from the team this week, and the jokes were ripe for the picking.

-"But who will miss chip-shot field goals for us now?"

-"Who among us hasn't squandered our second third ninth chance?"

-"Good. The only thing time he lived up to his position was when he was kicking in doors."

There are many other kicking related jokes to make.

And we welcome them all.

"Crab cakes and football, that's what Maryland does!"

You see, this line is so funny in the movie because Maryland doesn't do SHIT for football.

Sure, the Ravens won the Superbowl last year. But for the past decade, that's been about the only thing to write home about (if people from Baltimore were able to write).

Maryland beat WVU 37-0, which was awesome.

Then they lost four out of five, also awesome.

That one win in their past five games? Against UVA. TURBO AWESOME!

So to recap: Maryland only beats teams we hate more than Maryland. THANKS TERPS!

So Weaver is stepping down. As for his replacement, all we ask is that he doesn't like noon games as much.

Whoever it is, we're pretty certain they can't possibly like noon game any more.

As for this game… well, prepare to be frustrated. But you knew that already.

Just have plenty of beer on hand and you'll be fine.

-Drink any time Cody Journell is mentioned (per d_w, he actually did contribute!).

-Drink for every reference to Ralph Friedgen.

-Drink for every stupid ass "Fear the Turtle" reference.

Fact: B-dubs has not submitted anything. He is a douche.
Response: While true, I am a douche for far better reasons than this.
Fact: The years between 1987 and 2000 were known as the Dark Years for Maryland football.
Response: For my own well-being, as well as you as readers, I decided to not read any more about those years. Let’s just say they were bad…really bad.
Fact: Ralph Friedgen was known as an “offensive genius.”
Response: Any idea why Frank didn’t give him a call when he left Maryland in 2010?
Fact: From 1856-1916, the football team was known as the “Farmers.” They then adopted “The Old Liners.” Finally, because “The Diamondback” was already the name of the student newspaper, they went with “Terrapins.”
Response: Talk about striking fear into your opponents. At least our mascot bench presses 500 pounds whenever we score a touchdown.
Fact: Even Maryland has 2 championships in football.
Response: Are we really the only team in the ACC without one?
Fact: We are 15-15 against Maryland all-time.
Response: The average score of our games is VT – 14.1, UMD – 12.8. Expect nothing different this weekend.
Fact: Though to be fair, in the 2000’s, we are 4-0 against Maryland and the average game score is 35.5 – 9.3.
Response: So maybe Maryland really is that bad.
Fact: Fear the Turtle.
Response: Just kidding. There is absolutely no reason to fear the turtle.

They have TWO players named Yannick. One of them forgot a "c".

Imagine growing up as a Yannick. Not having to worry about if, when someone called your name, they were actually talking to you.

Then you go to college AND THERE'S ANOTHER F*CKING YANNICK!

Each week (or whenever he feels like getting off his lazy ass), d_w submits a Zombie Kill of the Week. And… he just flat out dropped the ball.

So your humble editor has to pick up his slack.

The Zombie Kill of the Week OBVIOUSLY goes to AJ Hughes.

We stole that from a much better Hokie blog.

-If Ohio State could go undefeated and stay outside of the National Championship game we would be SOOOOO happy.

-How can anyone possibly have Stanford ahead of Baylor? They might be better, but they lost to Utah. You can't do that.

Each week, the Carnegie Mellon Football Analyst submits his own Hokie..something.  But he's currently attending MAryland for grad school. Because they accept ANYONE. 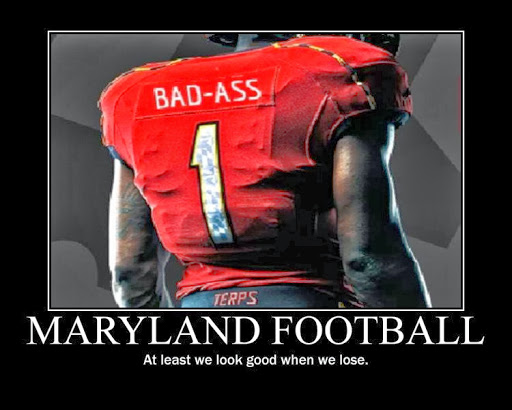 We clearly have different definitions of "good". Which make sense, since you go to Maryland.

The Analyst also wanted to prove that he could do more than assault our eyes with Maryland's unis. Here's his write up:

You probably don’t care, so I’ll try to keep this short. The Edsall era at Maryland is in its third year. The first year for every coach is a wash. The second was still a rebuilding year, but there were signs of progress with a good recruiting class with standout players like WR Stephon Diggs and QB CJ Brown until the injury bug hit the team hard. Not one, not two, but three starting QB’s got season ending injuries! By the end of the year, the team was using a kid that was recruited to play middle linebacker at quarterback. Do you know what it’s like to have a QB that was supposed to be playing a different position? Oh yeah, you do. Well, it sucks. I can’t imagine dealing with that for more than one season.

This season started out great with 4 straight wins including shutting out WVU for the first time in years. Then we got served a big slice of humble pie losing 63-0 at Florida State. Granted, they are really freaking good, but to not even be able to compete is a disappointment.

We stand at 5-4, 1-4 in the ACC. Our two best wide receivers are out for the year. Here’s to another rebuilding year. Next year we move to the Big Ten. It’s been fun ACC, but now we get to play the likes of Iowa, Indiana, and Purdue. That’s some excited football! The fanbase still has confidence in Edsall. He brought UConn from Division I-AA to a respectable program in the Big East. Next year will be big. Maryland has got to make a statement in its first year in the Big Ten.

Fear the turtle! (I know, it’s lame, but in the words of the great Michelangelo: “I love being a turtle!”)

Well, that was certainly a lot of words.

Also, we never thought we'd see the phrase "respectable program in the Big East" being used as a serious argument for one's coaching ability.

Barry Pasternak: Now I don't want to say that kiss was hot, but if the boner police are here, I want a lawyer!

When you need to get rid of turtles, where do you turn?

The smartest man in the history of sewer mutants. 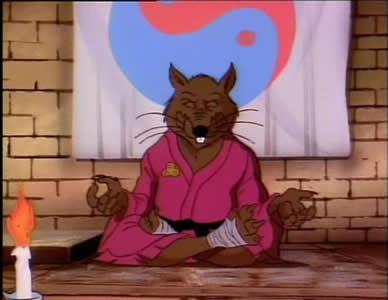 This season can be resurected from the sewers.

We just need the right sensai.