Welcome to Hatefest 2009. We have 7 weeks until kick off, and thought it would be a good idea to piss off everyone we hate. This week: Big names we never play. 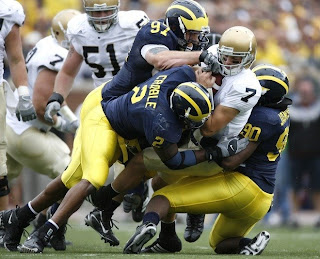 Oh Notre Dame. Once the great team that everyone aspired to play for. Now, the Irish are the bane of the BCS’s existence. Rudy even thinks they get too much credit. So let’s have at it.

The Town
Can’t say we really know anything about South Bend. Other than the fact that it’s in Indiana. And Indiana kinda sucks.

The School
Since the school seems to be pretty solid, we will discuss the mascot in this section.

As an Irish Catholic, I am absolutely appalled, offended, and livid at the use of the term “Fighting Irish”. How stereotypical can a school get? What, didn’t want to throw “Drunken” in there too? If the Native Americans can get angry about the Redskins, I see no reason I should let this ridiculous mockery of my culture continue.

Besides, I only drank 4 nights last week, and only 3 of those nights ended in fisticuffs. So THERE.

The Fans
Back in the day, if you were Catholic, you rooted for Notre Dame. That’s like a free 10,000,000 fans off the bat. But that’s why we call it “back in the day”. Today, we honestly can’t say we know a single fan of this team. Hell, we can’t even find anyone that doesn’t hate this team with a passion.

Apparently the only fans of this team are sitting on the BCS committee and in the AP. We can’t wait for all the old people in college football to die off so this whole Notre Dame bias can go the hell away.

The Team
HAHAHAHA!! 9 consecutive bowl losses (congrats on that Hawaii Bowl win this past season, boys!), 10-15 over the past two seasons (woooo Charlie Weis recruits!), and a worse record for the current coach than they had with Tyrone Willingham.

They are so overrated that they’re often mistaken for the movie Garden State.

But the true hate comes from the 2000 season…

No no, that’s totally fair. This system isn’t completely f’ed up.

How’d those bowl games go over, by the way?

We’re fairly certain that Michael “Ookie” Vick could have put up more than 9 points on the freaking Beavers.

So despite not ever playing the Irish, we still hate them for dicking us over.

Other
Charlie Weis still owes me $50.